9-11 PHANTASMAGORIA & THE PSYCHOLOGY OF WAR FOR PROFIT

The enemy without and within.


Playing this game is easy. Light them all up. Keep shooting. Reload.


Mega death is the trade of gamers. They are a war machine. There is no exit strategy. They don't want one. It's not their job to want one. 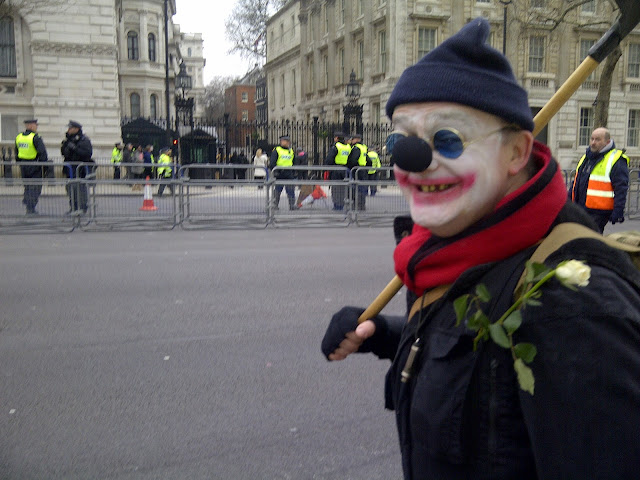 There are going to be no limits in the vertical levels of the new Phantasmagoria.  Players will access the next tier only after the previous one has been absolutely, devastatingly, murderously completed.


A new round of video weapons are being unveiled to a world media thirsty for impact images.


Journalists accepted to be embedded in Phantasmagoria platoons for better face-to-face imagery as enemy heads exploded.  But who is the enemy?  Anything that moves and looks suspicious.  Take your pick. You have the firepower.


Nobody asks to be embedded with insurgents. They receive Fahrenheits  well beyond their threats and capability.  The idea is to stamp out, with authority. Enemies are always expendable and they all look like bin Laden to me.


Surely, the United States of America is the pinnacle of civilised evolution, we are told. Advances in medicine, filmmaking and democracy testify to that.  Academy Awards continue to be churned out as thousands are being slaughtered. We must be right.


Developers have spent an awful lot of money making sure Phantasmagoria players are kept  happy. The array of weaponry is inexhaustible.


War is supported by the rest of the world, albeit sometimes incommoded by the penetrating stench of the inhumanity American forces themselves show in the fields of battle of Iraq, Afghanistan.


Inhumanity comparable only to the one shown by bin Laden himself on September 11 2001.


It's as if the terrorist raised the bar ten year ago and Americans still today think they ought to jump it too. So we were all terrorists now. 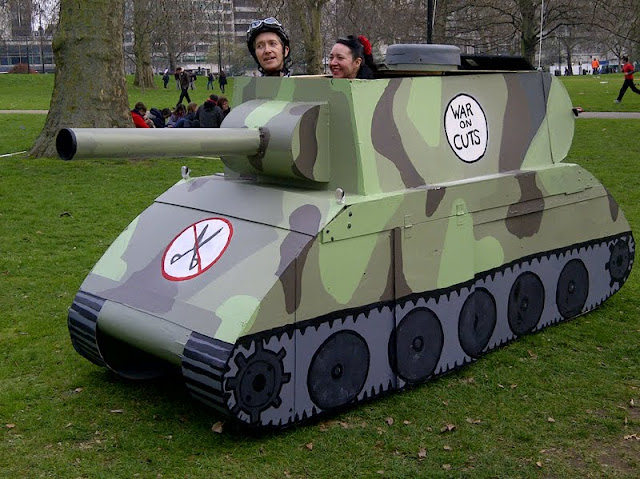 Only now, with the death of bin Laden assured, the Washington Post feels sufficiently liberated to say that Bush's battle cries may have been slightly flawed after all (Five myths about Osama bin Laden). How elegantly put. No blood, no pieces of liver flying in the air, no bombs.


It is curious how the article starts with Michael Moore, the American filmmaker and thorn in the thigh of the Bush Administration during the entire decade.  With films like Fahrenheit 9/11 he was the only one with any guts to confront the United States White House propaganda machine.


The Washington Post starts with Bush's fiercest critic because "he may have been flawed too".


This technique of mainstream media is well known. They start with a uncontroversial half told truth before telling us the controversial, palatable, double-sized untruth.  All beautifully packaged so nobody gets too upset.  It's a way of ensuring themselves against losing too many sales for never telling it like it is.


Hundreds of thousands of Arabs are now dead despite having had nothing to do with bin Laden.


Thousands of men, children, babies, women were all wiped out by a button in a computer game console developed for the next level of Phantasmagoria (info Apache video attack).


Even the WikiLeaks video showing the indiscriminate obliteration of a group of people is relevant 'only' because of the death of two Reuters photographers and not because perhaps a few others in that group may have been also innocent.


The point is, Iraqi insurgents were fighting against an invading army that was killing their people. But that doesn't cut any ice. The war was approved at the highest level and it will be prosecuted to the bitter end. Victory is more important than justice.


"What is 'moral authority'? Where does it come from? How do you achieve it?  Who bestows it upon you?" asked writer Harold Pinter. His answer was clear: "You don't have to bother. What you have is power. Bombs and power. And that is your moral authority".


Nobel Prize in Literature Harold Pinter objected to the use of 'moral authority' by powerful nations and he made a video about it (Pinter on moral authority). The occasion was the attack against Serbia by NATO forces in 1999. The US president was Bill Clinton and the British prime minister a young Tony Blair.


Pinter would never have thought his words would become prophetic only a few years later with a new US president. This time the theater of war would be Iraq and Afghanistan, two wars he also vehemently opposed.


But he had a long history of destroying US arguments since Reagan's Iran-Contra affair that toppled the revolutionary Sandinista government in Nicaragua in 1986. He already had no illusions then.


Harold Pinter revolutionised modern writing with plays like The Caretaker and films like The Go Between and The Servant.  When he won the Nobel Prize he was not held in great esteem by the British media.  Pinter's rhetoric was too strong and real for the academicians of Shakespeare.  In England official intellectuals prefer the safety of the past.

Gaddafi was a Western ally until February 2011. Suddenly, he was an enemy. 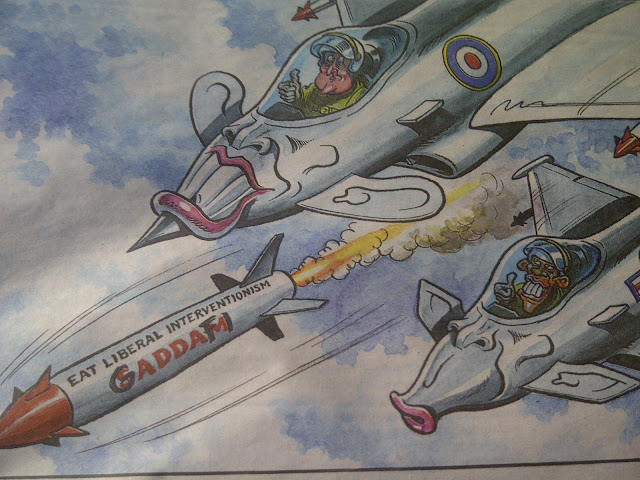 Any Iraqi that took up arms against the Iraq Authority (the United States) was deemed an Al Qaeda terrorist, a Saddamist or an Islamist. In short, an enemy of America. An enemy of common sense, of justice, of morality. And as such "you will never walk on this earth again".


The Iraqi insurgent was wiped out because of inferior firepower - not inferior morality, justice, common sense or courage.


These days, superior firepower decrees superior morality, according to the American credo.


The pretence of having any morality at all has long disappeared from Washington DC. Guantanamo Bay saw to that.


We are now in a superior level of Phantasmagoria


Until your finger is as stiff as a penis. War is sexy. Or we can make it look sexy.


The stories of those killed in foreign lands are never told. Iraqi and Afghani media doesn't have the time, the money or the interest to tell the personal stories of hundreds of thousands killed in their conflicts. They are just too many of them to count and most of them lie in unmarked graves.


Occupied countries' media survives on handouts from US government organisations involved in the reconstruction of a society they themselves destroyed.  As the media is controlled by the invader, the culture of secrecy crosses frontiers, permeates the subconscious.


Iraq and Afghanistan became the materialisation of the worst dreams of the prophetic film The Matrix.  This film foresaw the blurring or reality and double-speak in America (IMDb The Matrix, Wikipedia: The Matrix) just as George Orwell did in 1984 in Britain. The lie perpetuated into endless levels of Phantasmagoria.


The Soviet Union has been replaced by the United State of America as the focus of creative attention.


A New York Times article expresses some shame (Six hard years later) about the murder of a family at a checkpoint.  Six hears later they traced the girl who survived the burst of firepower.


But, somehow, the murder of hundreds of thousands of other Iraqis and Afghanis is sanitised. It does not have the same 'ring' as the callous murder of 3,000 Americans by Osama bin Laden. Is that so?


None of the reasons why we have been at war in two countries for the past ten years have been fulfilled. We still have every reason to kill as we have had for ten years. The death of Osama bin Laden does not matter anymore. In the new levels of Phantasmagoria, we have killed him many times before but he morphs into others and then comes back to threaten us, to taunt us, to ask as to shoot him down without mercy. Or so we believe it.


But that is not all.


New conflicts are being lined up such as Libya, Iran, Venezuela, North Korea.  This is a war with no end and when these are done and dusted the military machine has to keep on killing and new victims will be found.

"All power to the autocrats". 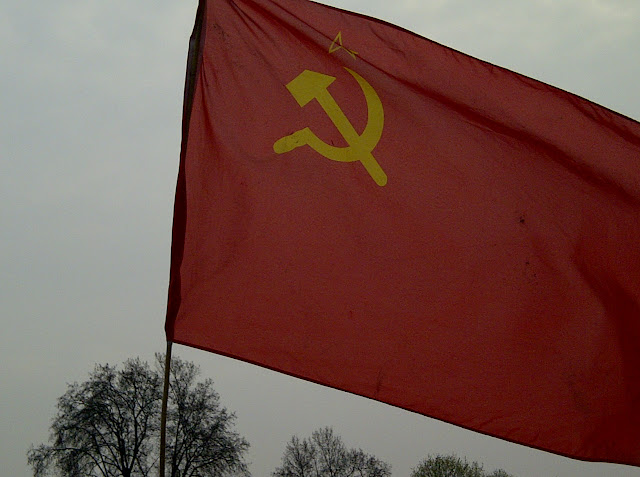 
Americans themselves are the only ones capable of putting a stop to the death, the destruction and to the expenditure a permanent state of war is consuming in a gargantuan scale.  Current deficit is 14.5 trillion.


US citizens will pay the deficit with their lives if it can be proven there is an outside threat ((Archive Example: Propaganda & Disinformation).


For this reason the American Citizen has to be kept away from decision-making and all their wishes must be interpreted by a tiny minority of vested interests.  This is why we have had ten years of war and counting. The country is on its knees but the wars have to be paid for.

(Second Part of this article is being updated with recent wars and drone tactics)
Posted by arbolioto at 04:51